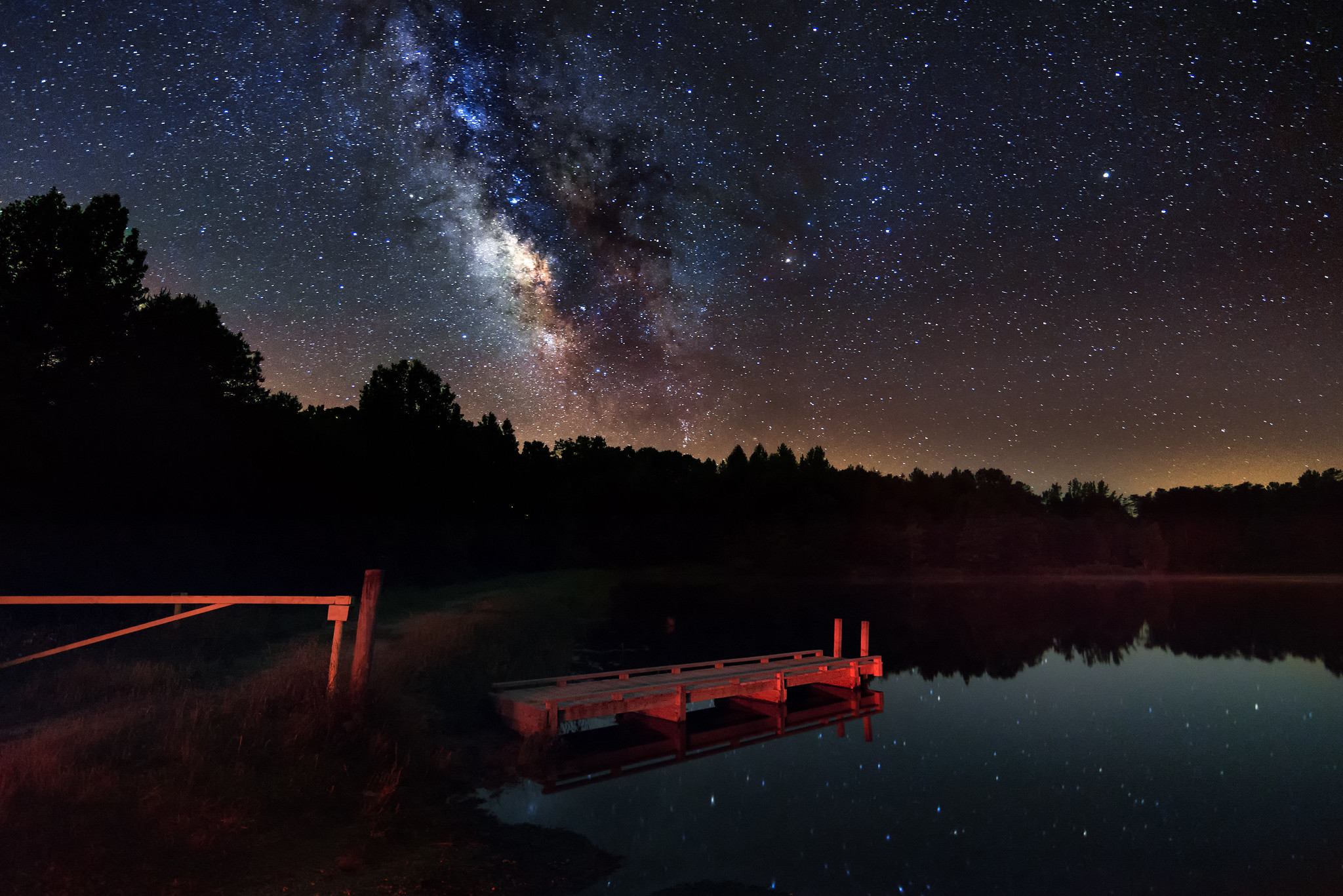 Do you remember the first time you saw the sky?

I do. I can’t recall it with a confident sense of time and place. I don’t know how old I was, which neighborhood backyard I was in, what I was wearing, or even who I was with. That memory is infused with a transcendent sense of Presence. It’s more like I remember what I was, rather than where I was.

I think you know what I mean. I looked at the sky day after day, as far back as I can remember, but all at once I seemed to really see it. The familiar night sky shifted in an instant from deep violet and pitch all speckled with starlight… to unfathomable distances, impossible heights and depths, peopled end to end by worlds alight with ancient energy.

I had made contact with Reality. I had seen – for one eternal moment – the world I had always lived in (and still do). It filled me with what I can only describe as Joy. It was a revelation.

What happened next? I can’t say. I assume my endlessly churning mind started up again. Whatever anxieties and curiosities seemed important back then probably reared up (as they often do) and skittered across the windshield of my inner eye. I probably thought of dinner, or school, or some argument.

And the thought-fog descended. I was me again. In my awkward body, with all my regular fears and passions.

My life is peppered with moments like that; fleeting moments of what I now know to be Awareness. It’s what recovery calls Conscious Contact, what some Romantics knew as The Sublime, what C.S. Lewis imagined in Narnia. It has always been, for me and many of the people I have known, the greatest of conscious experiences. There are accounts and descriptions of it in every language, culture and tradition I’ve ever cared to explore, but the simplest and most accessible way I have ever heard it described was by an individual, five days into detox from heroin and alcohol, who said:

Many individuals in long-term recovery have said to me (in so many words) that they were never obsessed with what drugs and alcohol did to their brains or to their bodies, but with what it did for their consciousness. Their great secret was that in some strange, synthetic way drugs and alcohol produced a vital sense of connection with the world; that here and there, in the right place at the right time, they could get themselves back onto that childhood lawn, gazing in awe at the night sky, without the noise, the fear, the trauma, the crippling sense of apart-ness.

Across the hundreds of therapeutic relationships and thousands of meaningful encounters I have had with individuals in recovery, this phenomenon has been a constant. Worthy and enlightening essays and studies have recently brought it into public discourse; the idea that a thirst for belonging and connection motivates so much of the devastating pursuit of perception-altering drugs of abuse.

But this truth has been at the heart of recovery from the beginning.

Think of one of your own night sky moments. There’s no rule or formula for them. Maybe it was the birth of your child, or one morning on a fishing trip, or out of nowhere on a walk in the woods.

Think of one of those blessed moments where the endless chattering of the mind was suddenly interrupted, the rumination of the ego seemed to dissolve and there you were, completely conscious and present to Life.

I know it was fleeting, and I know it’s not the kind of thing you can remember like a history lesson or a math problem, but try to put yourself back into that space; that space that you falsely thought you’d found again, years later, in drugs and alcohol.

Where is your shame?

Where are your fears?

Where is the craving and desire for the relief of drugs and alcohol?

It's time we lost our minds and came to our senses.

Treatment and recovery, facilitated and shared by conscious, compassionate people understands this. Effective approaches to treatment include this essential foundational pillar: that long-term recovery is possible if we can reestablish that sense of connection.

If we can find a way back home to ourselves.

If we can become a part of, rather than suffer apart from.

Our program is uniquely designed to treat the whole person – body, mind and spirit – and we do everything we can to ensure clients resume vital places in the lives of their families and communities. We believe in recovery, and we work every day to maintain an environment of enlightenment, education and self-awareness. Our model is simple. It’s about compassionate care, without compromise.

We work every day to transform the lives of individuals and families across Pennsylvania.

M B
16:48 28 Jun 22
Please tell me how anyone justify giving a mg of Suboxone to people off the street person's only giving them 1... mg.Tell me doesn't make sense that half the block is throwing up from opiate or synthetic opiates in your system administered by the. Willy nilly pharmaceutical techs??8mgAnyone who knows medicine or knows that drug knows that is way too much and they're just trying to keep people *lightly hooked.Not to mention offering it twice to someone who quit and beat it for a year. Yep.Im not talking about myself here but ppl i care a lot about.Not to mention the money Gambit behind the recovery house and push for continued profitable business practices.If you're looking for depth intensive care and zero corruptionthis isn't the place.If I find out any more corruption in this place God will help me expose itread more

marley horner
00:53 18 May 22
My experience at Blueprints was amazing, I got the help I needed, I had a great Councilor and other staff members as... well, I highly recommend Blueprints they saved my life I am sober and happy today as a result of the program it works.read more

Alex King
13:34 17 Mar 21
The techs here are great, the apartment style living is great, but as far as the rest goes it's a very mixed... experience. Watch out for rude staff, and make sure if you need something you track down whoever you need to and do it multiple times, the communication here is horrible. They'll send emails out to each other instead of saying something in person and 6/10 (that's being generous) times the email will be missed, so find the employee in person. I'm grateful for my counselor and most of the techs but beware of rude employees that are only there for a paycheckread more

Innovo Detox
13:58 10 Aug 20
We recently had the pleasure of working with the team at Blueprints and could not be more pleased. The care and... compassion provided to each patient is excellent to say the least. If you are in need of treatment we would highly recommend looking into treatment at Blueprints.read more

James Wolf
16:33 19 Mar 20
Worked here for one day over two months ago and still havent got paid. If this is how they do business, how can you... expect them to be a role model to there clients if they dont operate there business with character?read more

Matthew Reeves
15:21 25 Jun 19
Genuine staff that take pride in their work and in whom the company invests heavily. The core principles are apparent... all the way through this organization and are reflected in the response clients have at every level of care provided. They have remained true to their purpose from the very beginning with the same dedication to hiring the most qualified staff and providing the best possible treatment. So thankful to see that they have brought their wonderful services to a wider audience with the addition of new offices and expanded programs.read more

Cade Brown
02:42 24 May 19
Blueprints of Elizabethtown used to be, in my opinion the number one counseling facility in central Pennsylvania. Now... since they have grown larger. The owners seemed to have relaxed on the hiring process, or the good couselors were offered jobs at the Lancaster location. There is absolutely a depleting efficiency in recovery for evening groups at this location. Truely a shame and I hope the issue is fixed for future patients.read more

FOREVER SAMMI Henehan
17:24 09 Jan 19
A ethical and more effective solution to the disease of addiction. Give them a call. It can very well be the LAST... treatment you or your loved one will ever need.read more

Jeff Foley
05:03 13 Jun 18
A collective group of likeminded individuals with the common goal of helping those suffering from the disease of... addiction. From their chapters program to outpatient services, the team at Blueprints provides the highest levels of care geared towards individual client needs. I would recommend to anyone seeking addiction services to utilize the uniquely higher standard of care they provide.read more

Katherine Walker
03:55 13 Jun 18
Intake process was easy and comfortable. This is a place for addiction recovery, although I did experience other... patients that might not have been “addicts” needing to go to satisfy employment obligations for failed drug screening. Everyone is welcome regardless of history with substance and other mental health issues. Also I wanted to mention that each individuals path for recovery is personalized.I always felt safe at Blueprints. They provide transportation to and from the facility within reasonable distance. Everyone from driving staff to front desk was kind and respectful. My counselors were the types of people who’s impact of advice and motivation will last a life time. There’s different levels of therapy as far as intensity or frequency. Groups and individualized. The staff is what makes this place work.read more

Laurie MacAllister
21:41 12 Jun 18
Best place ever! Blueprints hires some of the best people. From the office to their drivers, everyone is there for the... same purpose.Helping others along the journey to recovery.You will not be disappointed.Unfortunately, some feel the need to leave bad reviews because of there own mistakes or issues. Baggage, we all have it....some continue to carry it, some decide to drop it at the door. That’s when true recovery begins!Give Blueprints a try, you’ll love the people surrounding you. Happy recovery!read more

Laurie Donovan
11:46 14 Jan 17
The staff was amazing and always friendly along with compassionate. Mike Hess, Tucker Thompson & Brook are all very... incredible people. They all strive to help you to succeed by filling you with the necessary knowledge & tools regarding your addiction/disease. I want to Thank the entire staff for the help and guidance i received during such a difficult time. Everyone within Blueprints helped me see & feel the positive future I have ahead. Thanks Guys & God Bless!read more
Next Reviews